The Many Ways Dogs Rescue Us and Improve Our Lives 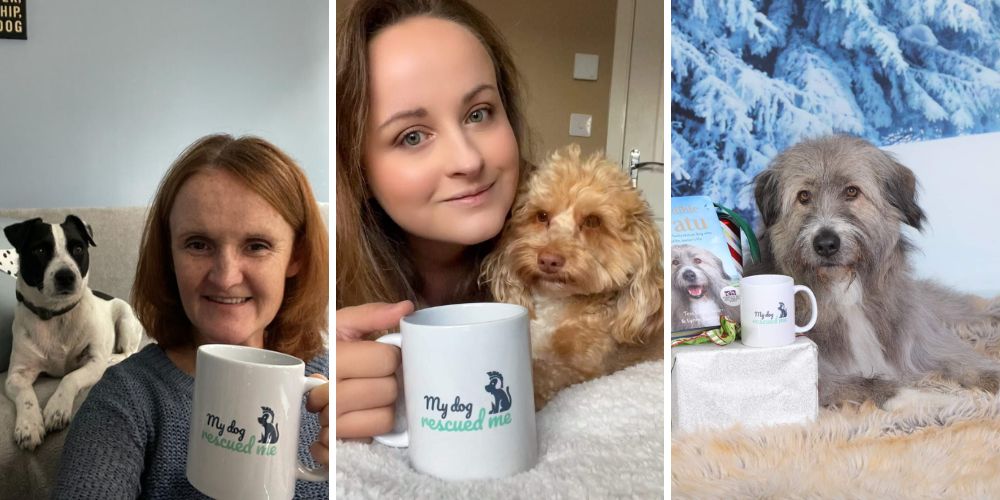 Dogs are often referred to as “man’s best friend” for a good reason. They have been our companions for thousands of years, and their loyalty and affection have helped us through some of the toughest times in our lives.

From the moment they bound into our lives, dogs have a unique ability to change our lives for the better. My own dog Beautie did exactly that. She helped me through the grief of losing my father, which you can read more about here.

Dogs can rescue us in so many different ways, and they can have a profound impact on our lives. Whether they are providing us with physical protection, emotional support, social connections, or health benefits, dogs are truly a man’s (or woman’s!) best friend.

I’d like to share the incredible heart-warming stories of three wonderful ladies and the effect their dogs have had on their lives.

The lovely Rachel Spencer, who has played a vital part in getting DoggyWarriors off the ground and in the press. She is truly amazing and I’m really grateful to have her in my life. She is also a massive dog lover with a story that needs to be told.

Then we have the gorgeous Laura Tracey. Laura is one of our very first supporters and has helped spread our awareness, which I am so thankful for. She has such a beautiful story that she has been brave enough to share with us.

And lastly, Tess Eagle Swan, who is a great friend and cheerleader whose life has changed rescue dogs lives as much as they have changed hers. 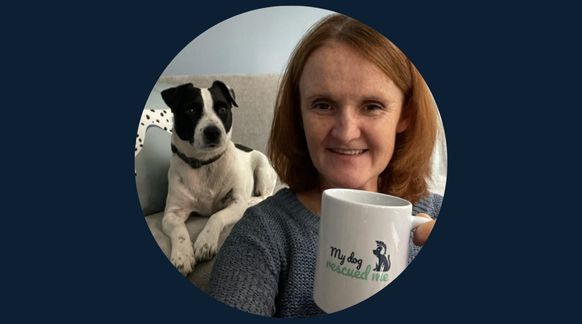 “I adopted Daisy in July 2009. She’d been found as a stray in Manchester City Centre and taken in to Manchester dogs home three years earlier. My friend Jane adopted her from there and when she had a baby, I volunteered to care for Daisy while Jane adapted to life as a new mum. Thank goodness she let me keep her. Daisy was a rescue dog but she rescued me.

At the time, I was in my early 30s, single and living alone. I had a demanding job as a freelance journalist, and all around me my friends were getting married, having children of their own and I felt stuck and very lonely. I didn’t think I COULD have a dog because of my work, it meant a lot of travel, but taking Daisy in showed me there is more to life. Instead of sitting in a car all day, I wanted to be at home with her, so I started coming up with story ideas about animals, people making a difference, pet products and trends and pitching them. It meant I could be at home with Daisy, and we did everything together, from walks, to trips to the pub to holidays, she was always by my side. Having her led to me creating a pet blog and writing about pets.

Less than a year in, Daisy died. She had dementia and a brain tumour and on April 17th 2018, I had to make the decision to put her to sleep. It was the kindest thing and the hardest thing. I still had the blog and how do you run a pet blog with no pet? Thank goodness people helped me by sharing their stories, like Monty Dogge’s owner Mark who told how he’d raised over £30,000 for The Royal British Legion and Doug The Pug Therapy Dog’s mum Cate who spoke about his work helping people and children in hospitals. It meant I could carry on.

Then pet brands and businesses approached me, and when they learned about my work as a journalist, asked for tips on getting in the press. So, I wrote a book, Publicity Tips for Pet Businesses. This then led to me creating online courses, a podcast and other products to support small businesses. By then I’d adopted another terrier Patch, who came from just outside Manchester City Centre in Sale. I was still heartbroken after losing Daisy and the blog was an outlet to explore topics like pet loss, and what it’s like to adopt another dog when you’ve said goodbye to one.

To this day I get messages from people saying the articles have helped which is so rewarding. I have so much to thank Daisy for (and Jane!). If she hadn’t come into my life, I think I’d be pretty miserable and lonely still. I would never have met hundreds of amazing people including you Lisette or have a business I love working with clients who are making a difference. They say every once in a while a dog enters your life and changes everything. I feel like Daisy came into my life for a reason, she brought me so much happiness. Now Patch is following in her paw prints and I feel so lucky to have these wonderful little dogs.”

Check out Rachel's pet blog by clicking on the icon below. 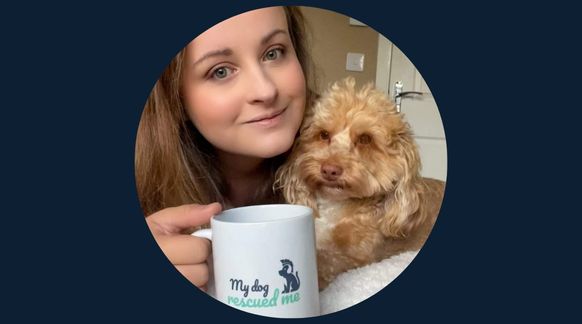 "When Hektor chose me, I was in a dark place. I suffer with long term chronic pain, I had lost my dad to pancreatic cancer, come out of a long term mentally and emotionally abusive relationship and as a consequence lost all of my friends and even lost myself. ⁠
⁠
I went to see his litter and they all played except Hektor, who hopped on my lap and screamed if someone tried to take him off me. Having Hektor meant I had to look after myself so that I could look after him. ⁠
⁠
He helped me gain the confidence to go out and try new things, find things I love and never feel alone in doing so. In having Hektor, I have made so many new friends, experienced things I’d have never dreamed I would and had incredible opportunities. ⁠
⁠
He taught me to love life and love myself again."⁠ 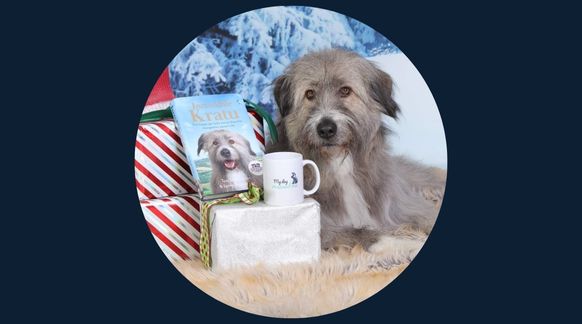 The story of Tess and Kratu is so powerful. She has even gone on to write a book about it - Incredible Kratu. This is what Peter Egan, the actor and animal right activist wrote in the foreword:

"If you are reading this foreword, I hope you have either bought this remarkable book or are about to do so. I can assure you that you won't regret it. Incredible Kratu is a story of courage, bravery and above all incredible and inspiring companionship. I have had the great pleasure of meeting both Tess and Kratu on a number of occasions both here in the UK in the House of Commons and in the European Parliament. Kratu's appearance at the EU was a first and a riveting moment for those taking part in my presentation regarding the horrible situation facing stray dogs in Romania and throughout Eastern Europe.

Kratu is a remarkable companion, which when you consider the life that Tess rescued him from, is a testament to the description "companion animal" and this wonderful dog's great heart. Everything about his life before rescue was dismal and deeply depressing. You will journey with Tess through her own life, also full of challenge and heartbreak, until she meets this remarkable dog.

It is difficult to determine whether Tess saved Kratu or whether Kratu saved Tess, either way their individual stories are remarkable, heartbreaking and inspiring. The most important outcome is that they found each other. This is clearly a meeting of two souls who were destined to intertwine and in so doing save and strengthen both their lives together and inspire others about the meaning of kindness, love and compassion.

Enjoy this journey..you are in for a treat."

I have read the book too and it is one to put on your 'to read' list. It's honest and inspiring. I have added a link to the book on Amazon below.

We have created a mug to honour all the dogs that change our lives for the better.

This Christmas, The ‘My Dog Rescued Me‘ mug is supporting the Manchester and Cheshire Dogs Home.

Manchester and Cheshire Dogs Home will have dogs that are in the kennels over the festive period (like most dog charities), they go out of their way to make sure to make it as special as they can for them too. Each mug will help buy a dog’s Christmas Dinner and they will we make sure that all dogs get a little something special from Santa.

We won’t let the dogs miss out on this special time of year. 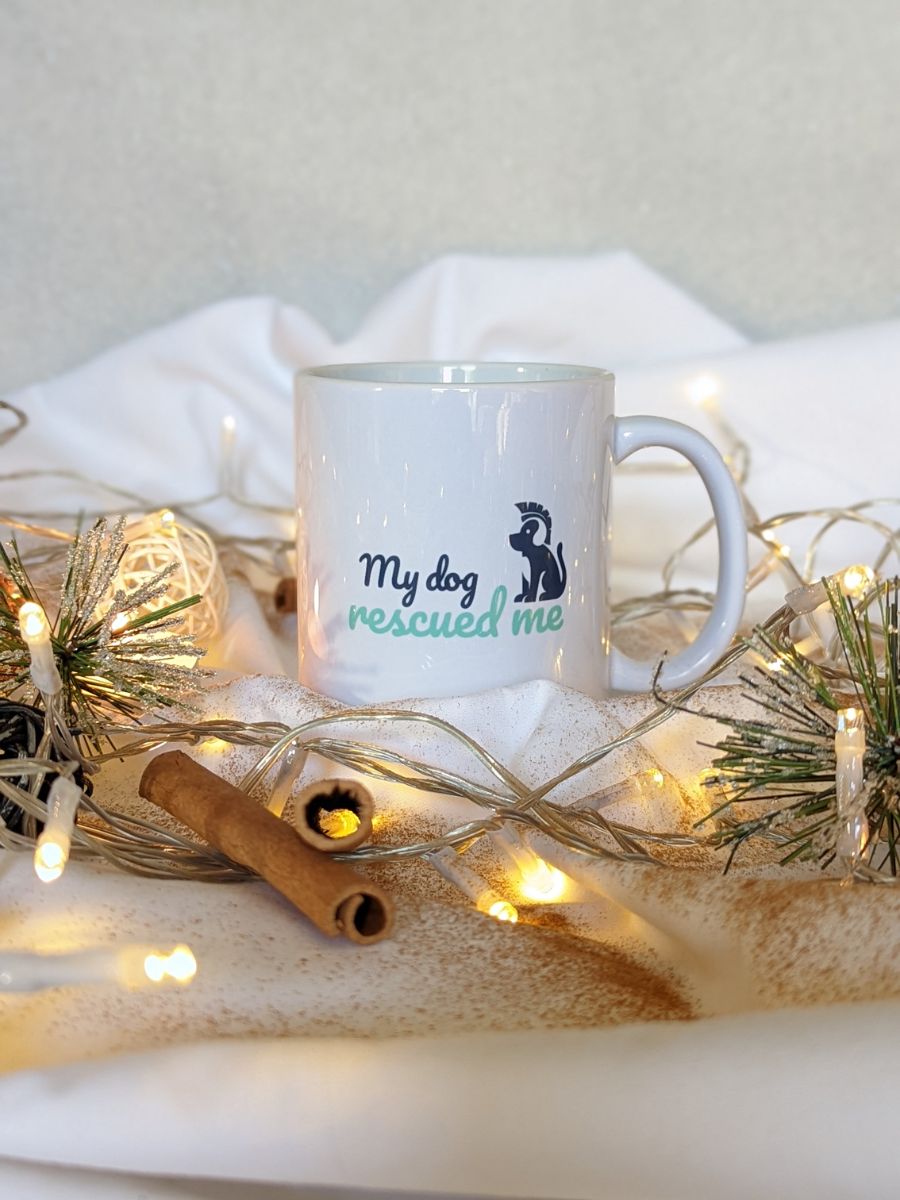 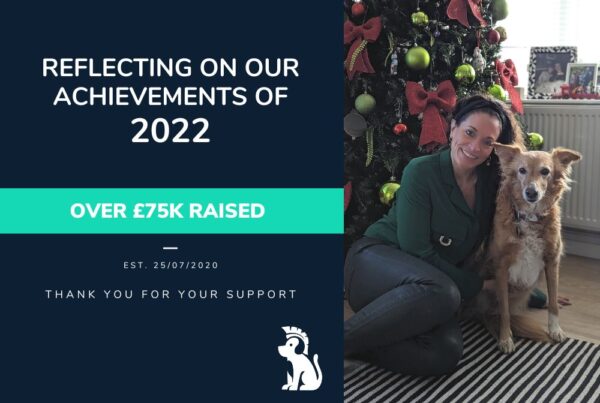 Reflecting on our achievements of 2022! 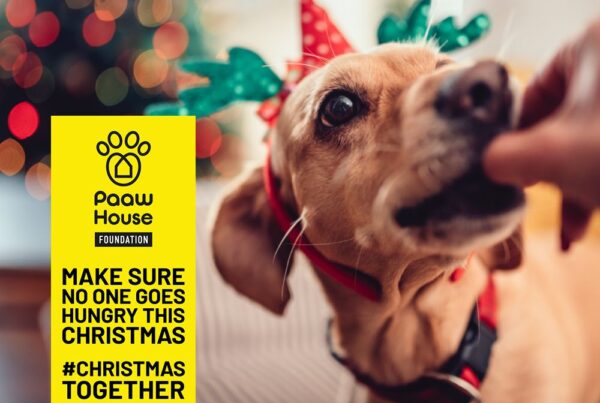 Supporting the PAAW House Foundation and their campaign #Christmastogether 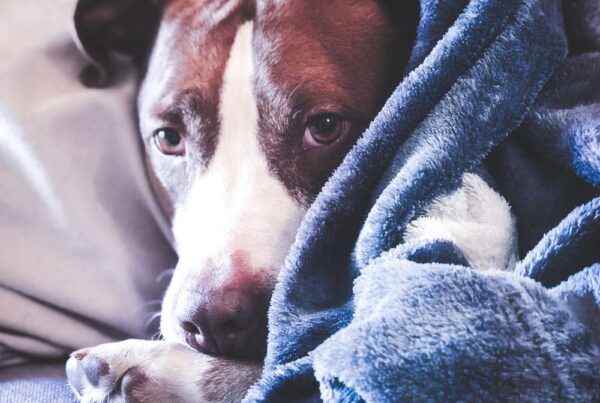 My dog is scared of fireworks, what should I do?

Our Shop
Returns and Exchanges
FAQs